Starflight is loaded with sixteen Top 20 hits from 1978 and 1979.  HERC's precise carbon dating process puts the probable release of the album as 4th quarter of 1979, in time for the Holiday shopping season. Starflight was billed as part of K-Tel's Headliners series which was first teased back in the gatefold of Gold Rush 79 and included Night Moves, Together, Hot Nights & City Lights and The Seals & Crofts Collection.  As HERC has covered both Together and Hot Nights & City Lights previously here on The Kollection, let's take a quick look at those other two Headliners albums, which will not be getting the K-Tel Scale treatment. 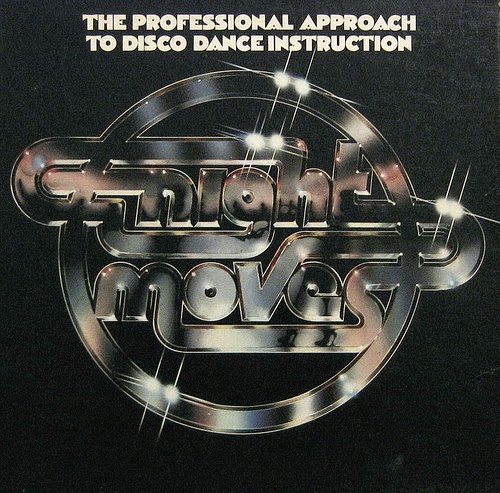 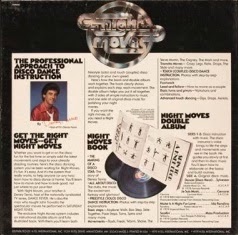 Night Moves is an awesome title (and logo) for a fairly lame album.  It is three sides of disco dance instruction from Dance Fever's Deney Terrio (the man who taught John Travolta his moves for Saturday Night Fever) and one side of music - four songs - to dance to.  It is a greatly expanded, celebrity instructor take on 1978's Let's Disco! 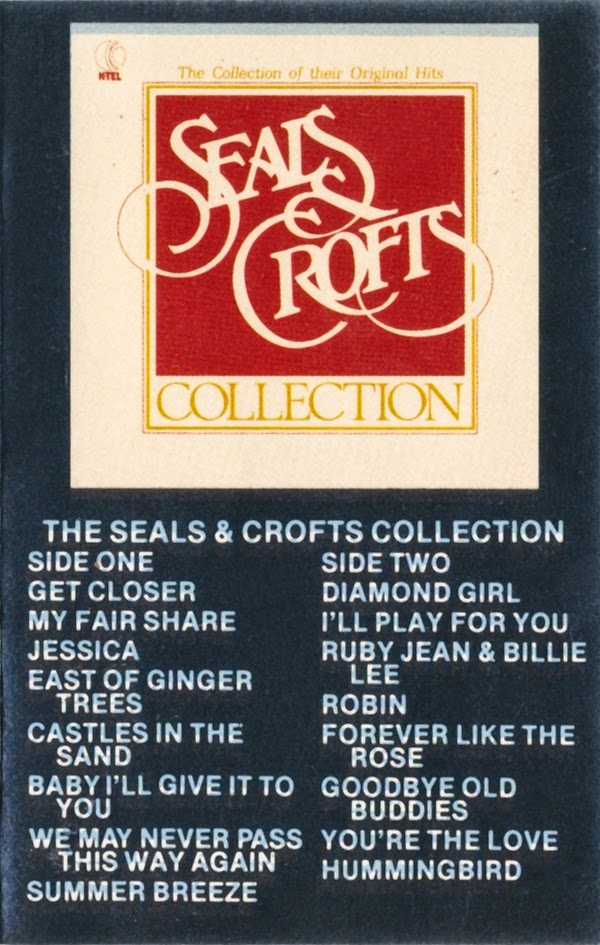 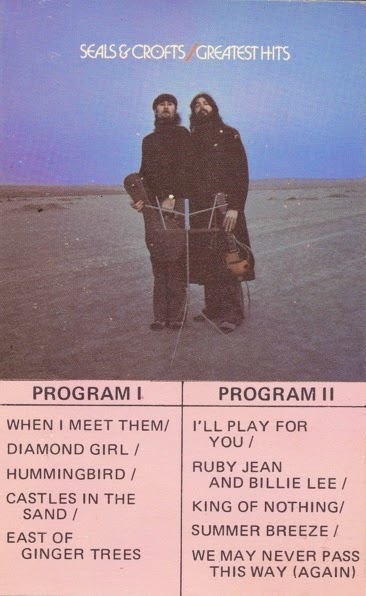 Seals & Crofts, the uncrowned kings of seventies compilations, saw a brief hit-making career from 1972-1975 documented by their record label with Greatest Hits, a ten song compilation (Canadian cassette shown, above right) in 1975.  The bearded duo scored three more Top 40 hits over the ensuing one thousand days following 1975 and their label farmed out an updated singles compilation (The Seals & Crofts Collection) which dumps two of their original greatest hits in favor of eight others including HERC fave "Get Closer".  Seals & Crofts were preceded by Frankie Valli & the Four Seasons, Creedence Clearwater Revival and Diana Ross & the Supremes in having their own US released compilation album from K-Tel.  In 1980, Abba and Elton John would join the club. 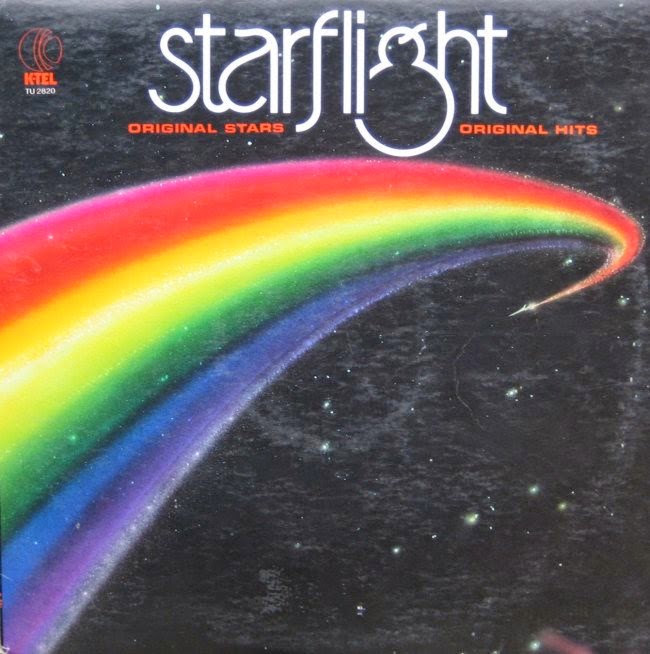 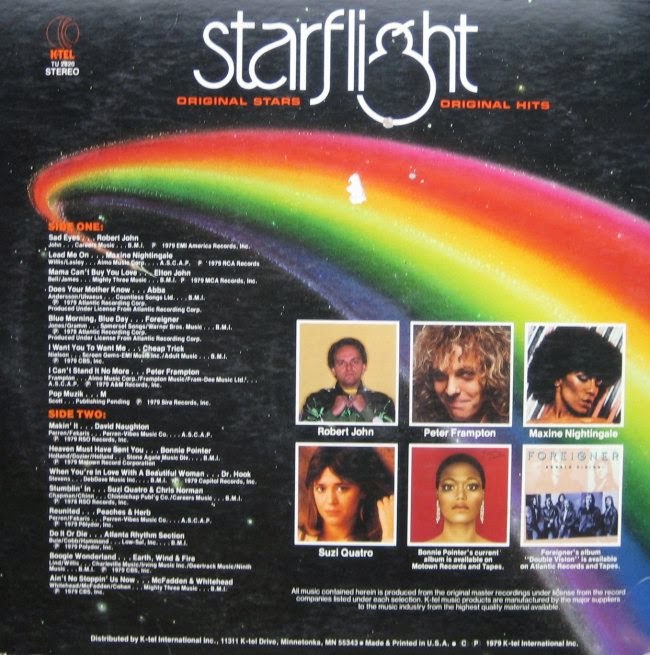 The sixteen tracks on Starflight cover a broad spectrum of Top 40 radio with the exception being a lack of country music.  HERC sees Pop and crossover Number Ones on the tracklisting and has a real good feeling that Starflight will easily make the Top 10 Highest Scoring Albums of the K-Tel Scale thus far, forty-one albums in.  Before we get to the K-Tel scorecard, let's watch and listen to just a few of HERC's favorite songs on the album:

It's a hit! And with a score just shy of 34, Starflight lands at #7 in the Top 10.  Not as much overall crossover as HERC had suspected although 25% of the songs made three of the four Billboard Singles charts monitored for the K-Tel Scale. As the last featured album from 1979, Starflight had one thing in common with some its fellow 1979 releases: a change in the style and color of the label on the vinyl albums as seen below.  The change didn't go too smoothly with some titles, though. 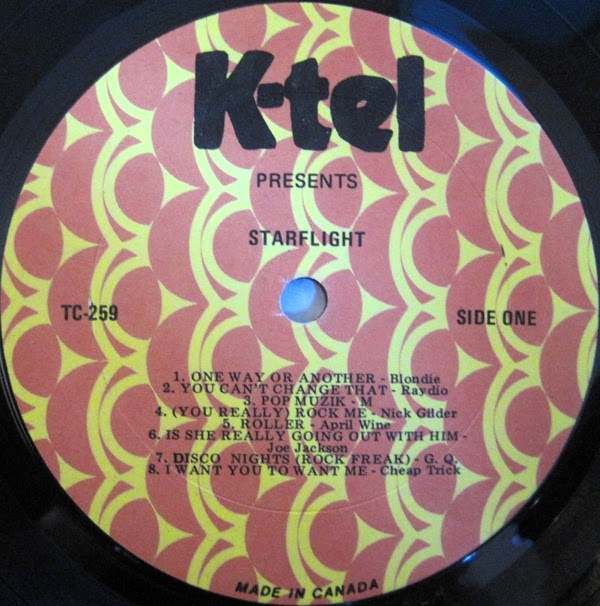 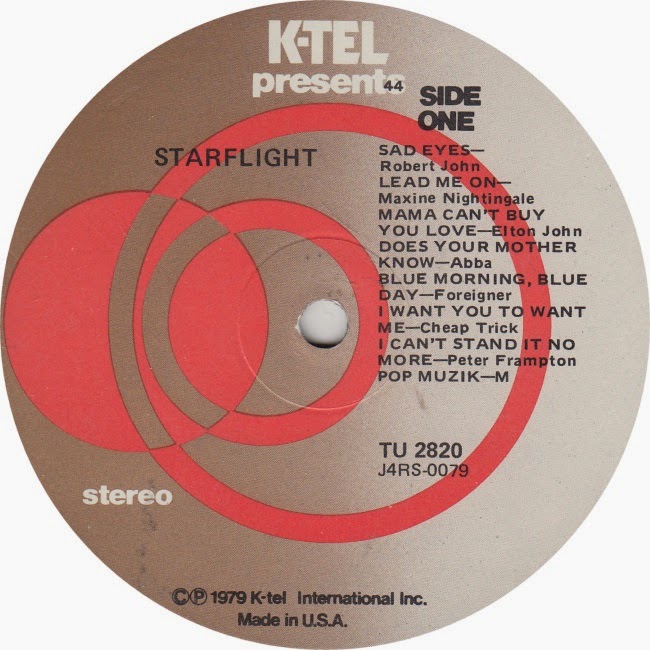 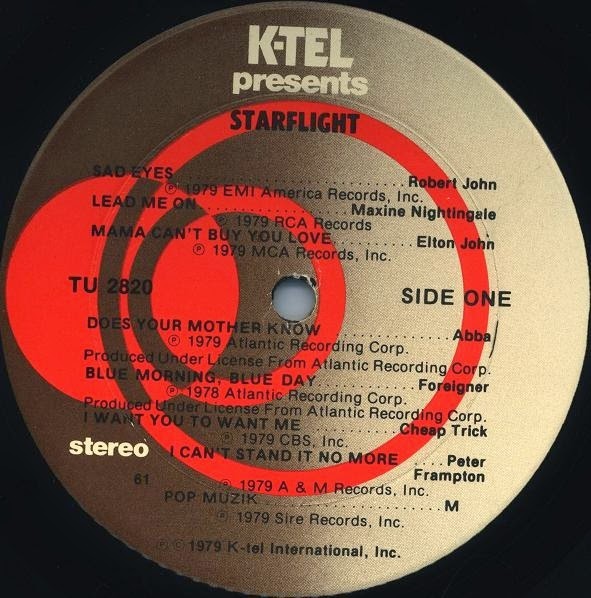 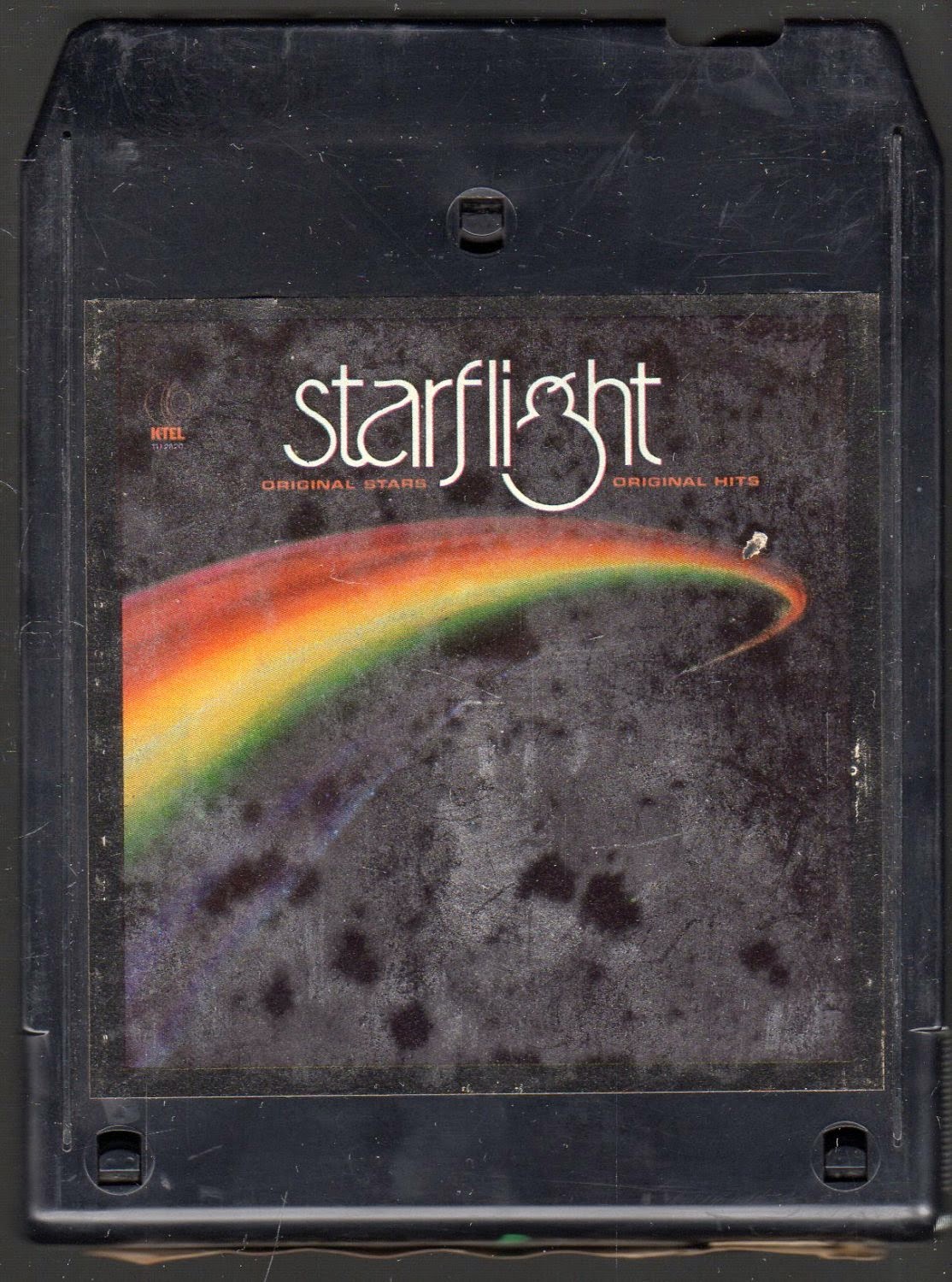 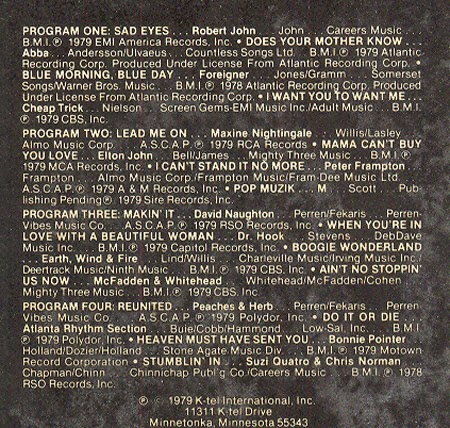 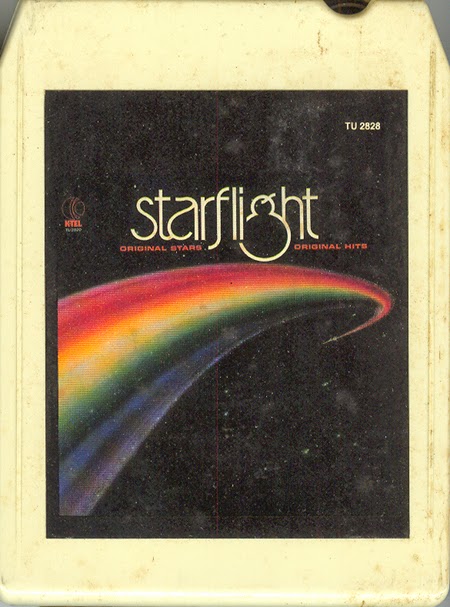 As usual, the tracklist was re-ordered to better suit the eight-track tape's four channels.  Starflight eight-tracks exists in both black and white color variations.  The cassette format mirrored the vinyl album's tracklist as seen below. 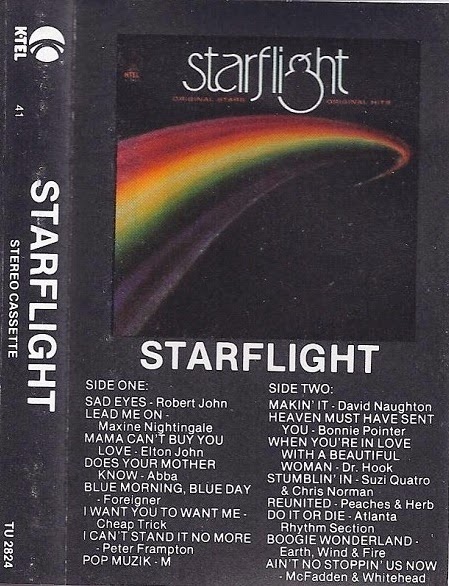 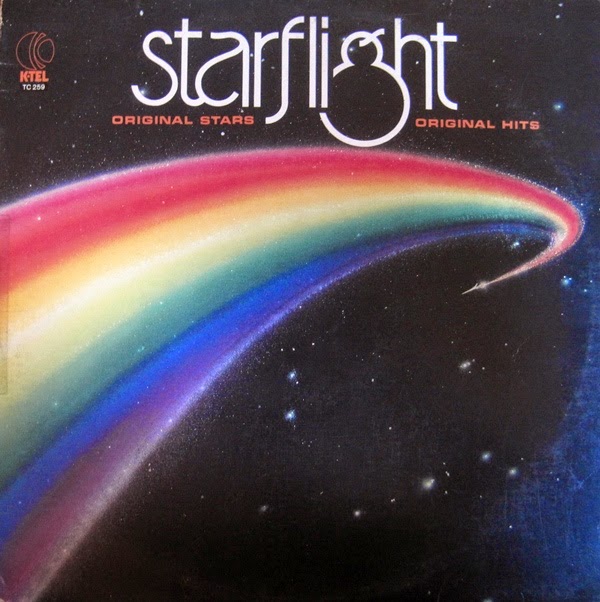 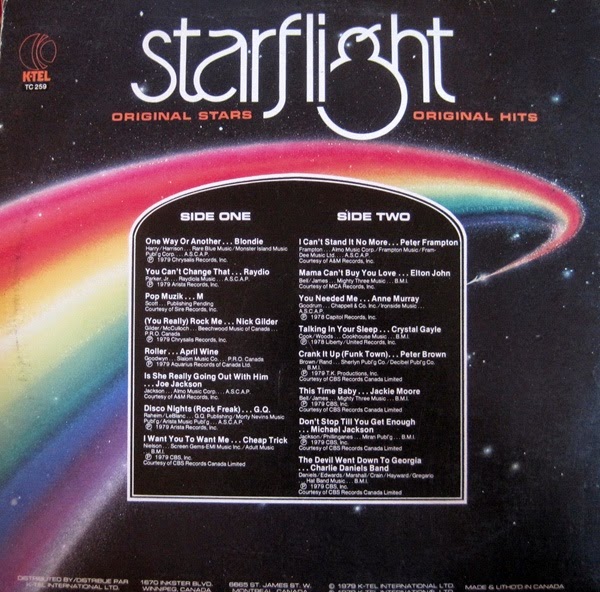 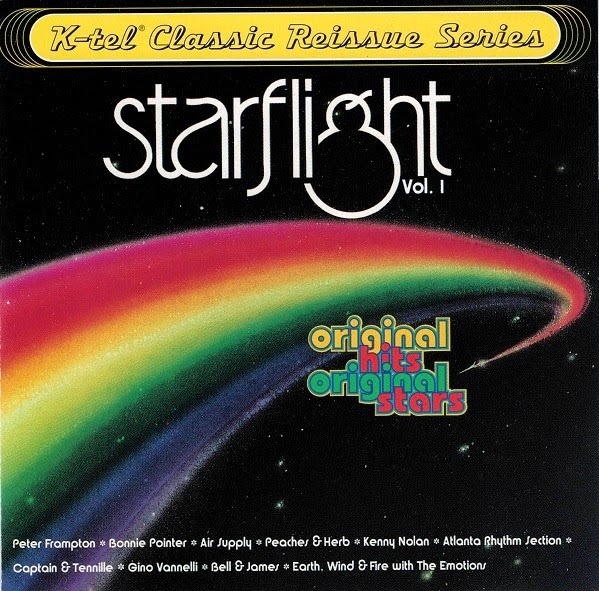 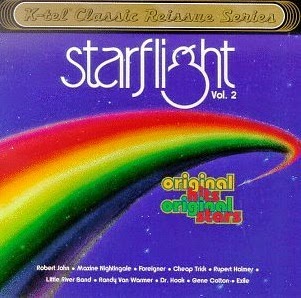 Starflight was the last of the ten K-Tel albums issued on compact disc as part of the label's Classic Reissue Series in 1997.  Ten of the album's original sixteen tracks were split equally across two discs with an additional five tracks per disc added for a total of ten songs on each. 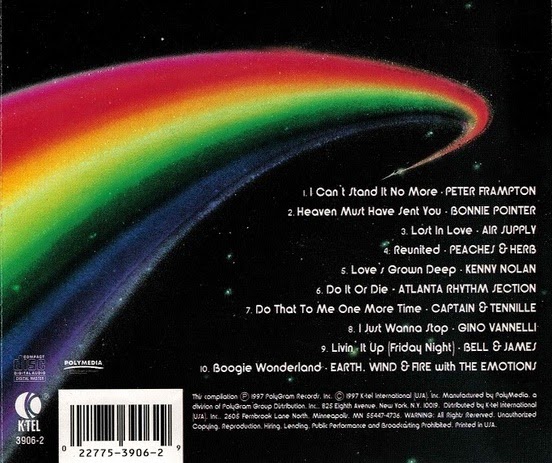 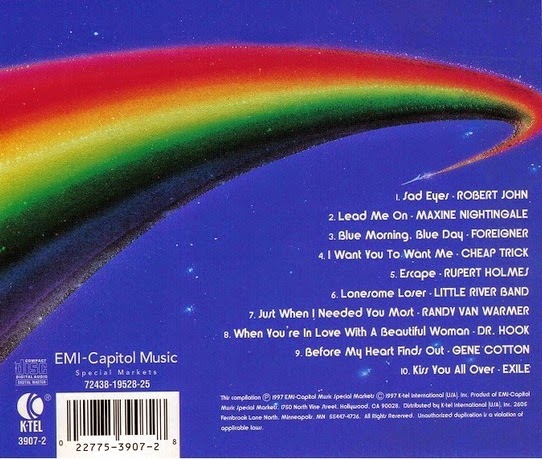 Next up, after posting three albums from 1980, we get In Tune With the 80s for good with Images - "the soft magic of today's rock" 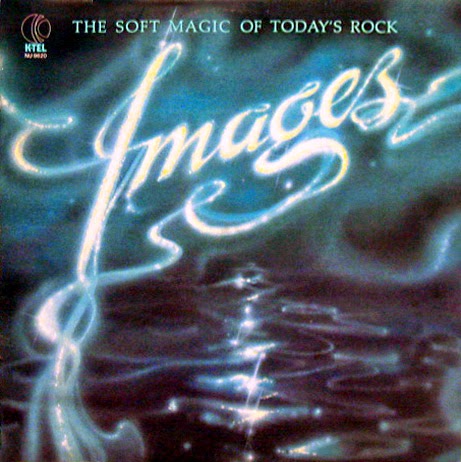