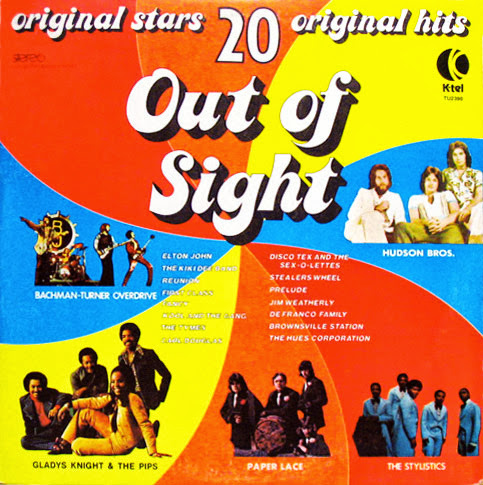 Featuring 18 Top 40 Hits, Out Of Sight [1975] would seem to have a slight advantage on the K-Tel Scale as none of the first three albums had more than 17 Top 40 singles.  Upon closer inspection, we notice that 7 of the Top 40 songs on Out Of Sight reside in the bottom half of the chart, dragging down the album's score like an anchor.  In spite of bonus points from a dozen crossover chart hits, Out Of Sight is currently ranked at #5 on this week's K-Tel Scale chart which features eight albums - one US and one Canadian version of each of the four titles ranked thus far.


With the album retailing for $4.99, we were paying about 25 cents per song.  Sure, the songs were heavily edited and sounded horrible but we weren't exactly audiophiles back then. If HERC remembers correctly (he's got a few price stickers on his 45 sleeves to jog his memory), he was paying 79 cents for 45s in 1976 - adjusting for inflation, we can extrapolate that he was paying 75 cents for two songs or 37½ cents per song although he bought very few 45s in 1975.  (Going the other way, that 79 cents from 1976 is worth $3.25 in 2013 US Dollars.) 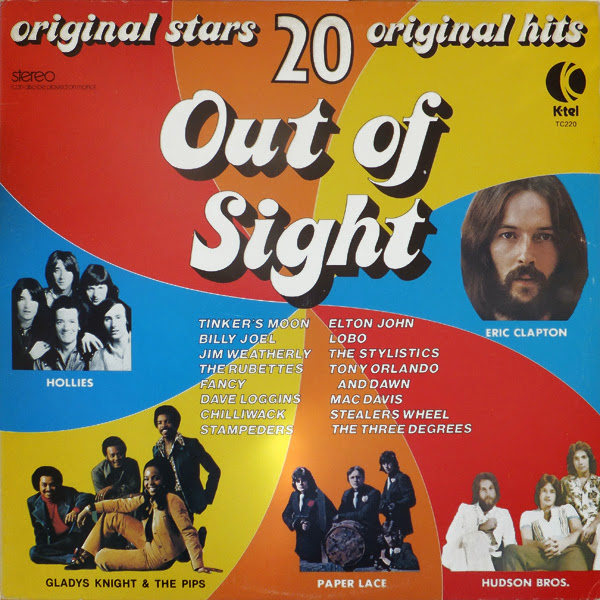 Song for song, HERC has to say that the Out Of Sight sold in Canada offers a more perfectly blended mix of songs from all the popular radio genres than its American brethern.  In addition to adding the mandatory Canadian artist tracks required by law, the compilers of the Canadain version of Out Of Sight swapped out all three #1 Pop hits from the US version - for another three #1 Pop hits.  Several artists had two different songs, one on each version of Out Of Sight, including Paper Lace, The Stylistics and Fancy.  And in spite of three zero scoring songs (aka the Canadian handicap), the Canadain Out Of Sight scored only marginally less than its American counterpart.  Factoring out those three songs would have given it the upset with a higher score than the US configuration. 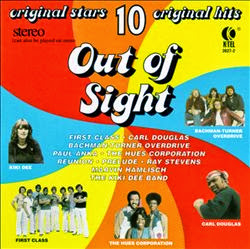 Seven of the songs from Out Of Sight [US] were supplemented with three other songs from 1974-1975 (including HERC's very first 45 purchase - "The Streak") to make the CD.  Although it was released in 1996, HERC has been unable to confirm if the songs included were the original recordings or merely the original hits by the original stars as stated on the label - there is a difference.  A reader has asked HERC to apply the K-Tel Scale to the K-Tel CDs he's been featuring so here we go.