A friend of the blog told me a story that happened recently while he and his wife were listening to the radio in their car and taking a short drive to nowhere in particular, just enjoying each other's company and the pleasant weather  A song came on, and it doesn't matter which one it was, and they both started singing along.  Not singing together mind you, not in harmony but like two people alone singing to themselves in the closed confines of their own private vehicle.  He said she knew more of the lyrics than he did but that didn't stop him from belting it out at the top of his lungs while she did the same.  When the song ended, he caught his breath and said "That was one of my Top 10 All-Time Favorite Songs!" and she said "I know, Dear. You said that the last time it came on and the time before that.  After a dozen years of marriage, I am pretty well aware of your All-Time Top 10 Favorite Songs and therein lies the problem...   you've literally said that about fifteen hundred or so songs.  Maybe it's time you sat down and worked out what your true All-Time Top 10 Favorite Songs really are?" in the way only a loving, supportive long-time partner could say it without sounding like a nag.  He replied "Nah!" and changed the station. 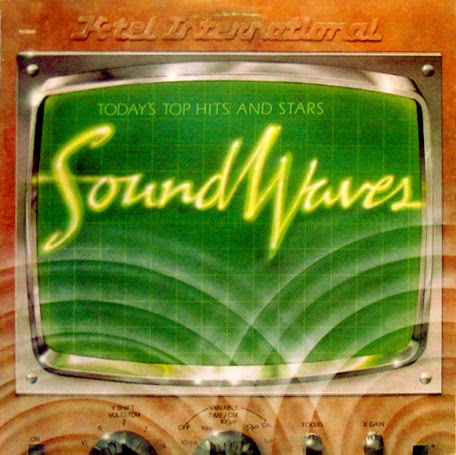 Unless this is the first time reading about an album from the K-Tel Kollection - if it is, Welcome! -  you know I am the same way though I have always made a conscious effort not to quantify the statement with a number as in "That's one of my All-Time Favorite Songs."  I have lost track of how many times I have said it, written it and even thought it. What can I say? I really like a lot of songs. I really like nine of the fifteen tracks on 1980's Sound Waves though I prefer the longer, original album versions to the single versions of six of them that K-tel licensed.

I'm also thinking that all of the songs did relatively well on the Hot 100 with all of them landing within the Top 40 and maybe three (or five) Number Ones.  Sound Waves should do pretty well on the K-Tel Scale and might even score well-enough to crack the Top 10 Highest Scoring K-Tel Albums so far - we've ran forty-three of them through the algorithm to date yielding an average score of 28.83 so Sound Waves will be number forty-four.  I'm ready if you are - shall we?

D'oh!  Just missed the Top 10 by a fraction of a point; twenty-eight hundredths of a point to be exact.  All because of one song, too - Pat Benatar's "You Better Run", which barely missed the Top 40.  If it had peaked at #36, that would have been enough to lift the entire album up into the Top 10.  Or if any combination of songs had placed six positions higher within the Top 40 (the POP column), it would have had the same affect on the album's overall score on the K-Tel Scale. Still, Sound Waves managed to up the average score for the first forty-four albums to 28.91. 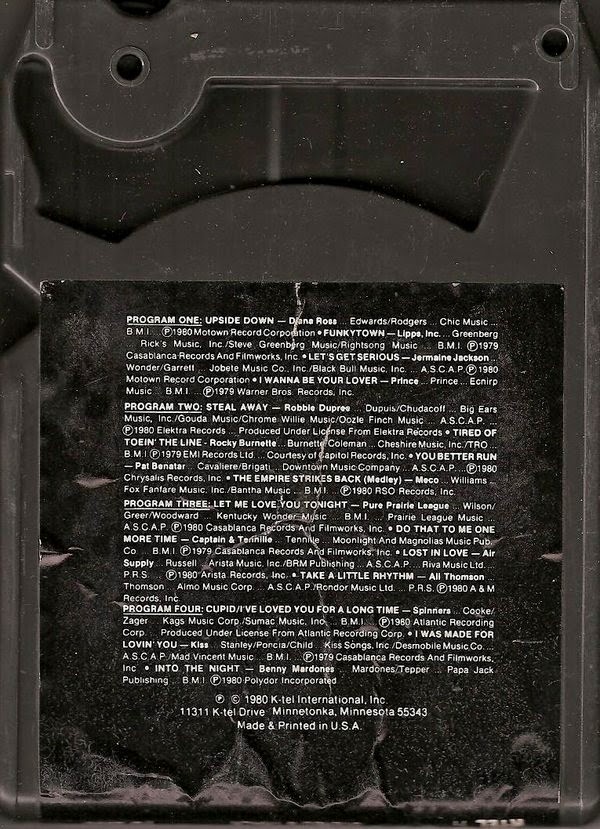 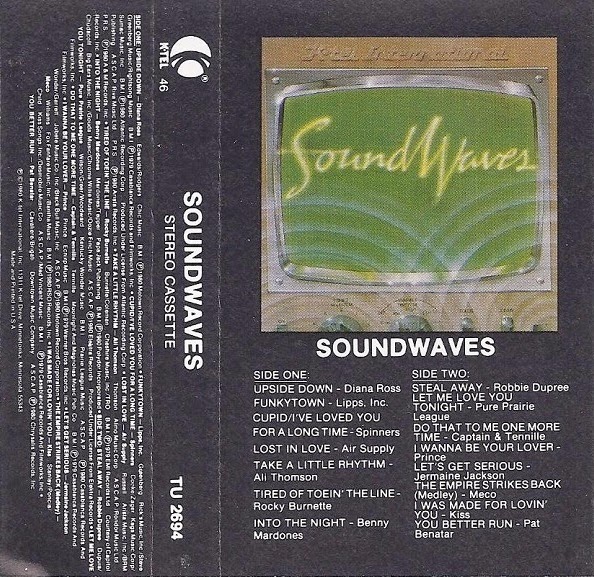 Both the 8-track and the cassette tape formats of Sound Waves have slightly rearranged playlists to accommodate the physical limitations of their respective magnetic mediums. Since the majority of the songs on Sound Waves bear a 1980 copyright date I feel confident in saying it was released in late 1980 though possibly as early as Autumn or the third sales quarter.  The most represented record label on the album is Casablanca with four songs.  According to sales data gleaned from Discogs and ebay, the K-Tel album bearing catalog number TU 2690 and known as Sound Waves is fairly common in very good or better condition and rarely commands more than $3 with the sweet spot being just below two bucks without including shipping, handling and any fees or taxes.  Listen to Sound Waves from "the top of the A-side to the bottom of the B-side" as host Adrian Qitana says,  via the player below. 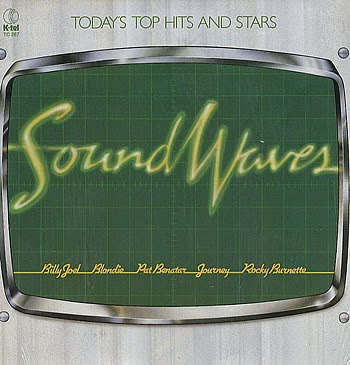 For my money, the Canadian Sound Waves has a better looking cover than it's American counterpart.  What do you think?  The tracklistings between the two share but one song - Rocky Burnette's "Tired Of Toein' The Line".  Counting that one, there are eight songs on this other version of Sound Waves that I number among my All-Time Favorite Songs though only two of them are available in longer versions: Blondie's "Call Me" can be found in a more than eight minute version on the American Gigolo soundtrack while The S.O.S. Band's "Take Your Time (Do It Right)" appears in an almost eight minute version on the group's S.O.S. album, with the 45 edit version being somewhat rare. 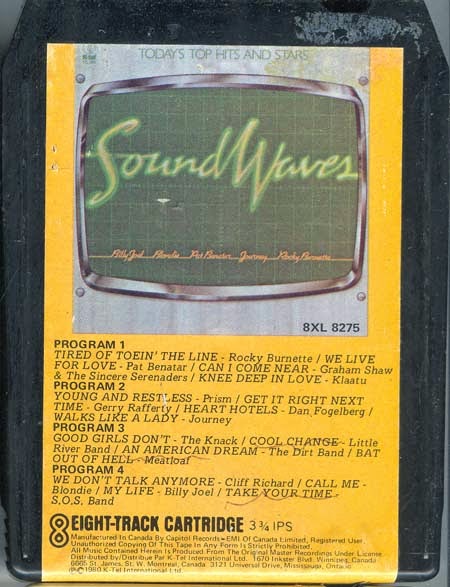 The 8-track format of the Canadian edition of Sound Waves also has its sixteen track playlist reordered.  Before we get to the first look at the album to be featured next time around, I'm gonna leave you with a two-hour Super-Sized Sound Waves Spotify playlist featuring songs from both the US and Canadian versions of the album.

Next time out, we'll continue our march through 1980 K-Tel albums with Wings Of Sound.  What else could possibly follow Sound Waves? 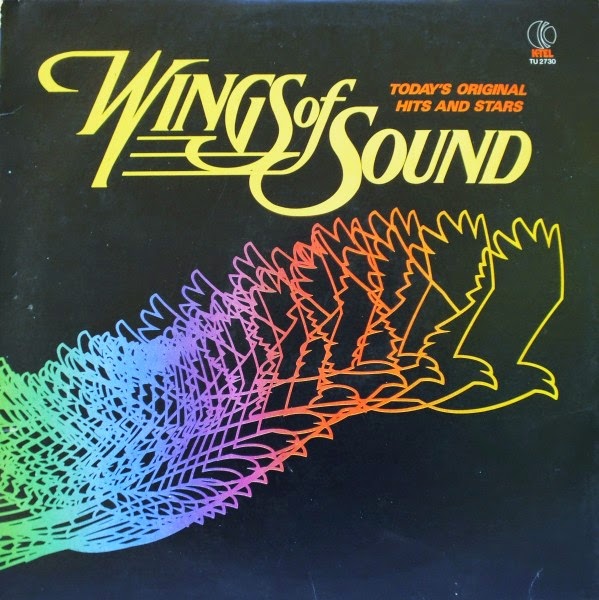 And the time after that, for our first album in May 2015, we'll be featuring the one that seems to be everybody's favorite, Rock 80! 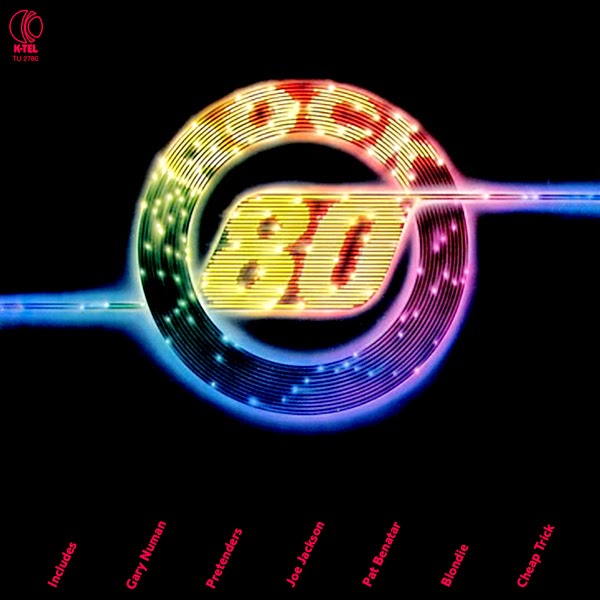