Radio Active was one of K-Tel's three January 1982 releases: Night Flight has already been featured on the Kollection and Heart of Rock will more than likely be the first album of 2016.  As an early 1982 album, all fourteen songs on Radio Active are from 1980 and 1981.  The album is a solid pop collection with some R&B, Rock and Adult Contemporary crossover potential.  Forced to choose, I would say among my many favorites on Radio Active, "Lady (You Bring Me Up)" is probably my favorite song of the bunch. 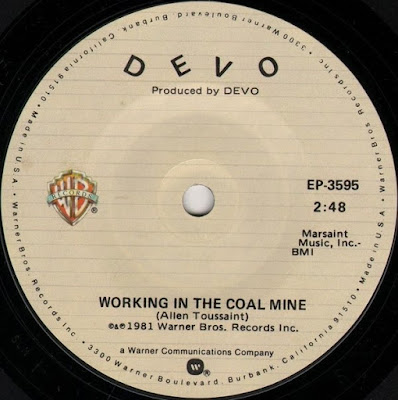 And though I was into buying albums over singles by 1982, I do own a 45 from Radio Active and it is an odd one.  Some copies of Devo's 1981 album New Traditionalists came with a bonus 45 of the band's cover of "Working In The Coal Mine", which was featured on the soundtrack to the film Heavy Metal.  The single features a small spindle hole like a standard album rather than a large spindle hole like most 45s and also has the same song on both sides.  There is no indication anywhere on the single regarding its Heavy Metal connection.  I later picked the proper single up from the soundtrack with the sweet picture sleeve, below.  Interesting to note that the man who wrote "Working In The Coal Mine", the legendary Allan Toussaint, passed in November 2015. 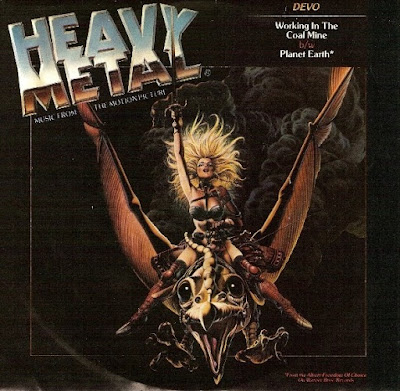 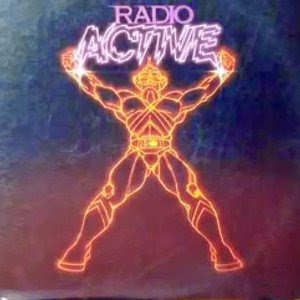 After a second run-through of Radio Active, there is definitely a noticeable more rock oriented vibe at the beginning of the album, especially the first five tracks.  Then there is a brief pop-rock pause and then a solid three song R&B block opening side two before the final four songs close it out.  I'm gonna project that my earlier remark regarding crossover potential will be spot on with the Rock chart seeing the most action.  I know there has to be a few number one songs on Radio Active but I am just not 100 percent positive.  Currently, after running 58 albums through the K-Tel Scale, the average score is 28.43.  I'm going all in and saying Radio Active will come very close to that score, more or less.  Here it is, the last K-Tel Scale of the 2015:

The album missed my expectations by a bit and it seems to be that the Devo song was the culprit, just missing the Pop Top 40 and missing out on valuable points.  Still, 10 out of the 14 songs were Top 20 with two of those rising all the way to the top of the chart.  As for crossover points, I failed to account for the Disco crossover of the R&B tracks and - surprise! surprise! - the Go-Go's.  Ten songs did make the Rock chart including three Number Ones.  Radio Active finishes with a below average score of 26.14 and actually manages to lower the average score down to 28.39 overall. 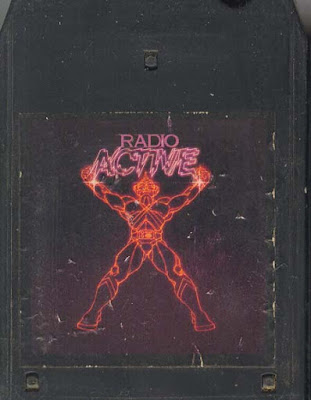 Radio Active is available on 8-track tape with a slightly re-ordered playlist.  Cassettes have been reported though I could find no artwork.  Bruce Janu devoted an episode of his show Adventures In Vinyl to his copy of Radio Active (listen below) and the general consensus among those voicing their opinions on the interwebs is that Radio Active is a great album that brings back a lot of treasured memories for those that own it or have owned it in the past. 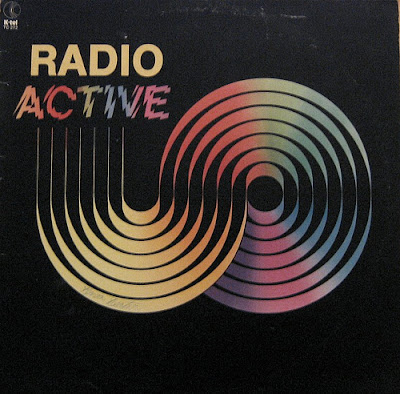 The Canadian Radio Active features different artwork and shares just six tracks with its American cousin.  The album boasts sixteen songs, two more than we got down in the States, and for the most part is a more satisfying listen with two notable exceptions.  The Alabama song, while lovely and beautiful, sticks out like a sore thumb among the rest of the songs causing a jarring and abrupt halt to the proceedings. The second side of the record has the same issue with the Alan Parsons Project song, which plods along even slower than Alabama's country slow jam.  As much as I enjoyed listening to the Canadian Radio Active, I became curious if it could hold its own on the K-Tel Scale.  There's only one way to find out so let's run one last K-Tel Scale for the year for real this time.

Not bad at all.  Four Number Ones on the Pop chart, maximizing the point totals for each and only two of the sixteen songs missed the Pop Top 40 altogether.  Add to that five crossover Number Ones on the Country, Disco, Rock and AC charts and its a downright shame that Canadian albums are ineligible for the Top 10 Scores.  Sure this one missed the Top 10 by at least a couple of points but what about the next one?  Listen to ninety-four minute Spotify playlist of both albums below or skip ahead to catch a sneak peek at which album is coming off the shelf the next time we meet.
When we return in 2016, the first record we'll be featuring is The Heart of Rock from 1982.  Its a collection of power ballads and features songs from the Seventies as well as the early Eighties.  I can tell by looking at its tracklist that though it has some of my favorite songs it will not be scored with the K-Tel Scale because many of them failed to make the Top 40. 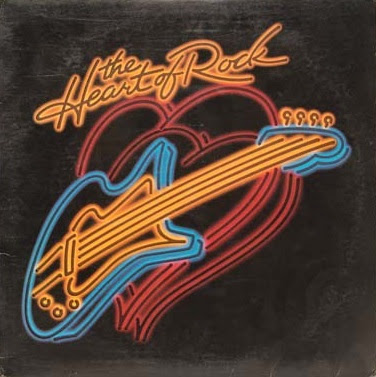